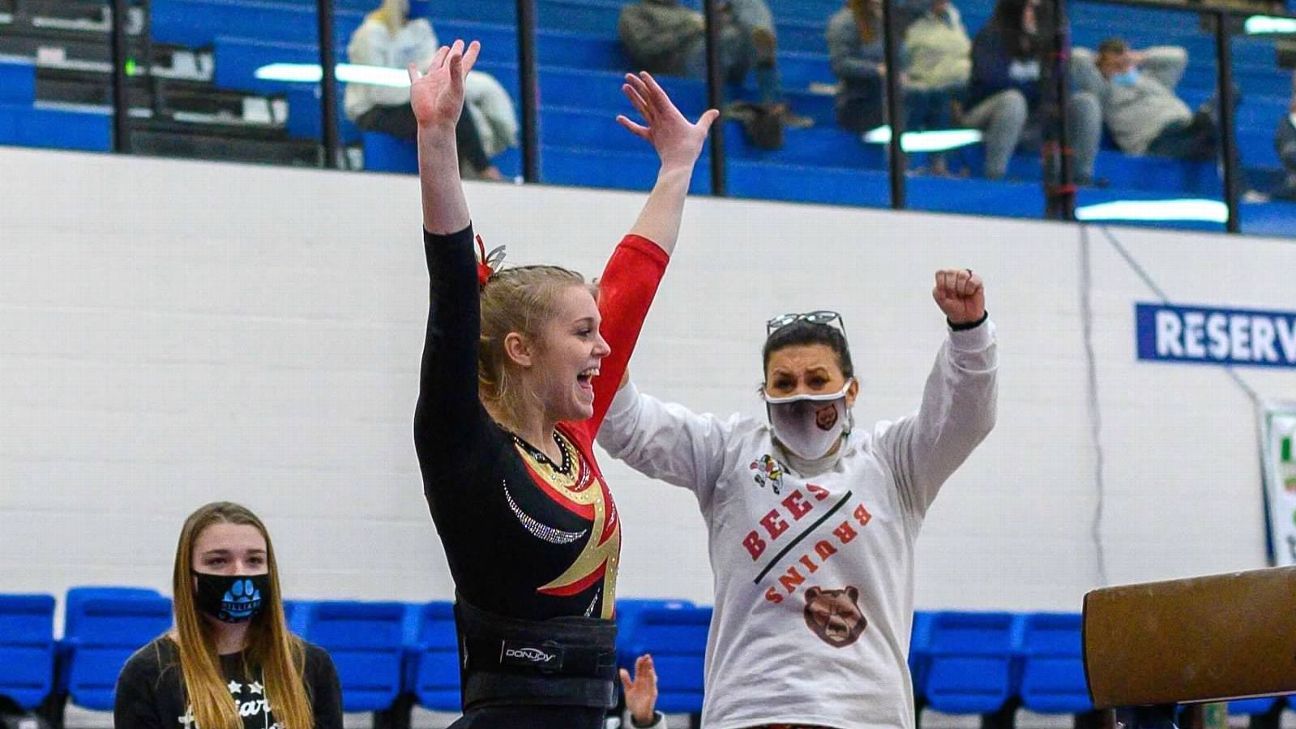 It was 2019 and she had just been named head coach of the gymnastics team at Brecksville-Broadview Heights, a suburban Cleveland high school.

But it wasn’t just any team. Schneider was now officially in charge of a team with a legendary streak of state title wins.

The Bees had won every championship for 16 straight years. And as the coach who took over the reins, the role came with a lot of responsibility — and a major fear that she would be the one to end it.

“She feels the pressure,” said her brother Greg Ganim. “Standing in the shoes of that [history] is not easy.”

Today, the streak sits at 18 — and March 4 at the 2022 state championships, the team will have the chance to make it 19. It all started before any of the gymnasts on the current team were born.

“It’s just mind-blowing that [the streak] is still going on,” Schneider said. “And I love it.”

According to the National Federation of State High School Associations, the previous record-holder in the sport was Madison High School in South Dakota, which had a 16-year state title run from 1995 to 2010. Behind that is Washington’s Bellingham Sehome, which won 13 consecutive state meets during 1973-85.

The Brecksville-Broadview Heights Bees have been so dominant in Ohio that from 2004 to 2014, the team didn’t lose a single meet — capping off at 777 consecutive wins (in tournaments, the winner is attributed a win for each team it beats).

This season, Brecksville returns a strong team including four seniors, three who have been to the state finals every year of their high school career. But, of course, they too want to continue the program’s legacy.

“We never want to be the team that breaks the streak,” said assistant coach Leah Miko, who is also a Brecksville gymnastics alumnus.

THERE IS PRESSURE every year for Brecksville gymnasts, but the program was built to help them handle that — and anything else that might come in the competitive world of gymnastics or in just being a teenager.

Schneider also had competed for the team, then become a longtime assistant, working with her parents, Ron and Joan Ganim, for years. Gymnasts who have competed in the program credit the Ganims’ and Schneider’s coaching style, especially their focus on mental health, for the streak and the team camaraderie that is built every year. Decades before athletes were speaking openly about mental health, Ron Ganim started a weekly classroom session that Schneider continues.

Melissa Prozy, who competed for Brecksville-Broadview Heights from 1998 to 2002 and now coaches gymnastics in Columbus, said she still channels her former coach when she’s coaching her children in gymnastics now.

Joan and Ron Ganim met on a blind date at Kent State in 1966. Joan was a gymnast and Ron a former football player. When she agreed to the date, she was looking for a way to go to the homecoming dance, but the two quickly became inseparable.

“From there he used to come to the gym every day to watch me and Rudy Bachna, who was my coach back then, said, ‘If you’re going to come here every day you’re going to become a gymnast or you’re going to learn how to coach.'” According to Joan, Ron tried to vault once and opted for the latter.

The two graduated and got jobs as teachers — Joan at the junior high school in Brecksville and her husband joined as a health teacher a year later. They started coaching at the high school and got varsity status for the first time for the girls’ team.

After the birth of their second child, Joan says she was told by school officials that would be the end of her teaching career. “So now we’re going from two-teacher income, no children, [to] one-teacher income, two children,” she said. “Doesn’t work financially.”

With the help of a bit of money from Joan’s parents, the Ganims started Gymnastics World, one of the first gymnastics schools in the area, and took a hiatus from coaching at the public schools. Gymnastics World, which now has two locations, starts with recreational programs for kids as young as 10 months and runs up through an elite club team where many of the Brecksville gymnasts train.

It’s also a key reason why the high school, despite not being able to recruit gymnasts like a private school could, is so competitive.

“Gym World is known for gymnastics and because it’s in Brecksville, it draws people to the sport,” Prozy said. “And I think because of that the high school thrives because they have Gym World right there.”

The Ganims returned to coach in Brecksville’s program again in 1988 when Schneider decided she wanted to compete for the high school, 12 years after her parents left.

“I knew if I wanted to see her compete, I’d have to be there,” Joan said.

When Schneider graduated, she followed in her mom’s footsteps and walked onto the gymnastics team at Kent State. While she was at college, Brecksville got its first state championship in 1994.

Schneider followed in her dad’s footsteps and became a health teacher when she graduated from college. In 2004, when Schneider was an assistant coach, the streak began.

The past 18 years have included one of Ohio’s most legendary performances: When Alecia Farina scored the first perfect 10 in OHSAA history on vault in 2015. She was a neighbor of the Ganims, trained at Gymnastics World and was so close to the family that when Ron Ganim died she had his name tattooed on her wrist.

There have also been years when the streak looked like it could be in danger.

Miko, the assistant coach, competed for Brecksville from 2007 to 2010 and remembers both of those well. She recalled that in 2008 after some ups and downs in the meet, the Bees were relying on then-senior Andrea Kinzer to do a move on the vault so difficult that when she tried it the year before, she broke her ankles.

Kinzer went again and on her second vault earned a 9.85.

“So that was insane but I think that was kind of the dynamic of the team that we would do absolutely anything to keep the streak going,” Miko said. “And if that means doing something that was out of our comfort zone, at the end of the day if it didn’t turn out in our favor we did give it everything that we got.”

Today, a wall in Brecksville’s gym is covered with the state championship banners and a trophy case at the front of the school is dedicated solely to the gymnastics teams’ accomplishments with a quote oft-repeated by Ron Ganim: “Be a legend in your own mind.”

At his funeral in 2017, the line to pay respects to the family stretched for more than eight hours.

ETHANNA ALGIE MOVED to Brecksville from Florida before her sophomore year of high school. She’s the only one of the team’s four seniors who hasn’t spent her whole career with the team. Despite having competed in gymnastics for years, she admitted the legend of the streak gave her a bit of self-doubt.

“It was very scary coming into the environment,” she said. “But everyone was so welcoming and I don’t regret it for a second.”

The team made gingerbread houses last year as a way to build camaraderie and the seniors pointed to team bus rides and dinners as their favorite memories of high school gymnastics.

Joan Ganim said that when it comes to pressure, she’s kept her advice simple: “Just have fun,” she said. “Whatever happens, happens.

“You can’t control it. If you do your best job, that’s all you can ask for.”

Nina Mandell is a journalist living in Cleveland. She has previously served as the managing editor of NBC Sports Washington and USA Today’s For The Win.

Gadget
We use cookies on our website to give you the most relevant experience by remembering your preferences and repeat visits. By clicking “Accept All”, you consent to the use of ALL the cookies. However, you may visit "Cookie Settings" to provide a controlled consent.
Cookie SettingsAccept All
Manage consent