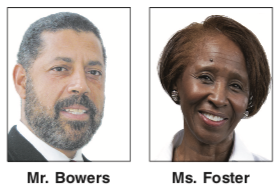 City Hall spends hundreds of millions of dollars a year to buy goods and services and pay for construction and renovation of its buildings, pipelines and other infrastructure. But only a tiny fraction of that money is spent with Black- and minority-owned companies.

According to a report from the city’s Office of Minority Business Enterprise, the city issued contracts worth more than $700 million to private companies during the 2019-20 fiscal year.

However, only $37 million, or about 5 cents of every $1, was spent with nonwhite-owned companies during that fiscal year.

Such minuscule spending is in line with the procurement spending patterns of the state government and virtually every other locality in Virginia, where minority-owned companies secure only a tiny share of the contracts such entities award each year.

But it is embarrassing for the state’s capital city, a majority-minority community in which Black people comprise more than 40 percent of the population and which has a Black mayor who has made diversity and inclusion a major theme of his tenure.

And it is even more embarrassing for a city, which in contrast to most Virginia localities, has a long-standing policy of setting goals to promote spending of its procurement dollars with businesses owned by Blacks, Asians, Native Americans and Latinos and which for decades has oper- ated an internal office, the OMBE, to try and make sure that happens.

Amid a booming economy that has benefited small and large companies and helped sharply reduce pandemic-related unemployment, the issue of the lack of city contracts flowing to minority businesses appears to have been put on the back burner.

“It doesn’t take a rocket scientist to know that Black businesses as well as Black people are getting the short end of the stick,” said A. Hugo “Al” Bowers, president of the Black Business Alliance of Virginia that advocates for increased contracting for Black-owned companies.

“Black people have been receiving disparate treatment since Richmond has been Richmond,” Mr. Bowers said.

Since first taking office, Mayor Levar M. Stoney has given little public attention to the issue of city spending with nonwhite companies. He did not talk much about the issue in his two campaigns for mayor, has mostly left the issue out of his State of the City speeches and given it short shrift in his budget messages.

Still, his administration with little fanfare has launched the first study that potentially could pave the way for change.

In mid-December, after a six-month review, city procurement Director Betty J. Burrell inked a $405,000 contract with MGT of America Consulting LLC, authorizing the company to conduct a yearlong study of the city’s contracting with a focus on the awards to nonwhite firms.

“The government should aim for diversity in spending that reflects the diversity of our city,” Mayor Stoney stated. “Diversity and inclusivity is our strength. We want to bring that strength to bear in our procurement practices.”

MGT’s charge is to conduct a comprehensive analysis to first determine “whether there is a significant statistical disparity between the availability of qualified, willing and able minority business enterprises (MBEs) and their active participation and utilization as contractors and subcontractors on city contracts.”

That first step requires the company to review five years of procurement data on contract awards and the use of MBEs, the contract states.

MGT also is to determine, if a disparity is found, whether the statistical evidence can be “corroborated by significant anecdotal evidence that the disparity is the result of past or current discrimination.” To do that, MGT is to conduct interviews with business owners and operators and others with potentially relevant information. 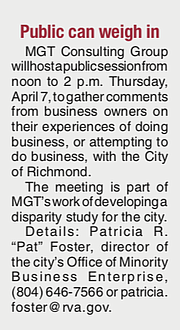 Once that information is compiled, and if a disparity “does exist,” the company is to offer recommendations on the best course for the city to close the gap between available companies and their use to carry out contracts.

MGT also is to determine if the city can boost MBE participation through the award of smaller contracts worth $100,000 or less that allow for more informal procedures.

This kind of study is required as the result of a 1989 U.S. Supreme Court decision in a Richmond case.

A contractor, J.A. Croson, challenged Richmond’s landmark requirement at the time that 30 percent of every contract be spent with Black-owned businesses to remedy historic discrimination.

In a ruling that reverberated across the country, the nation’s highest court struck down the city policy in finding that “generalized assertions” of past racial discrimination could not justify that kind of rigid quota. Strict proof was needed, the court decided.

In the years since, legal scholars have noted that local and state governmental entities have been limited to setting unenforceable goals for minority business participation in contracts unless they conduct the kind of detailed study Richmond is undertaking to determine if there is a disparity and if that disparity is linked to bias.

Greensboro Staffing, a minority-owned North Carolina firm, and Texas-based Customer Research International round out MGT’s team. The company already has started the work, the Free Press has been told.

Mr. Bowers is skeptical that the study will lead to much change and would prefer the money for the study be spent on preparing and training residents at the low end of the income scale to fill skilled jobs.

“The state has conducted disparity studies, but it has made little difference when it comes to how the state spends taxpayer dollars for purchases. Black-owned businesses still get less than 2 cents of every dollar the state spends,” he said.

Figures from the state Department of Small Business and Supplier Diversity back up Mr. Bowers’ assertion.

In the 2020-21 fiscal year, the SBSD reported the state and its various agencies and arms spent $7.6 billion with private firms. Of that total, only $99 million was awarded to Black-owned businesses, or 1.3 percent. Separately, the state spent about $300 million that same year with Asian, Latino and other minority-owned firms, or around 4 percent.

Still, Patricia R. “Pat” Foster, director of the city’s Office of Minority Business Enterprise, regards this kind of detailed study as essential for progress, and she has pushed for several years to get the city to spend the money to get it done.

She has presented a variety of practical policy changes to City Council that she believes would advance the inclusion of minority businesses in city contracts, though none of the City Council members has sought to introduce ordinances to carry out her recommendations.

F & B Business
We use cookies on our website to give you the most relevant experience by remembering your preferences and repeat visits. By clicking “Accept All”, you consent to the use of ALL the cookies. However, you may visit "Cookie Settings" to provide a controlled consent.
Cookie SettingsAccept All
Manage consent