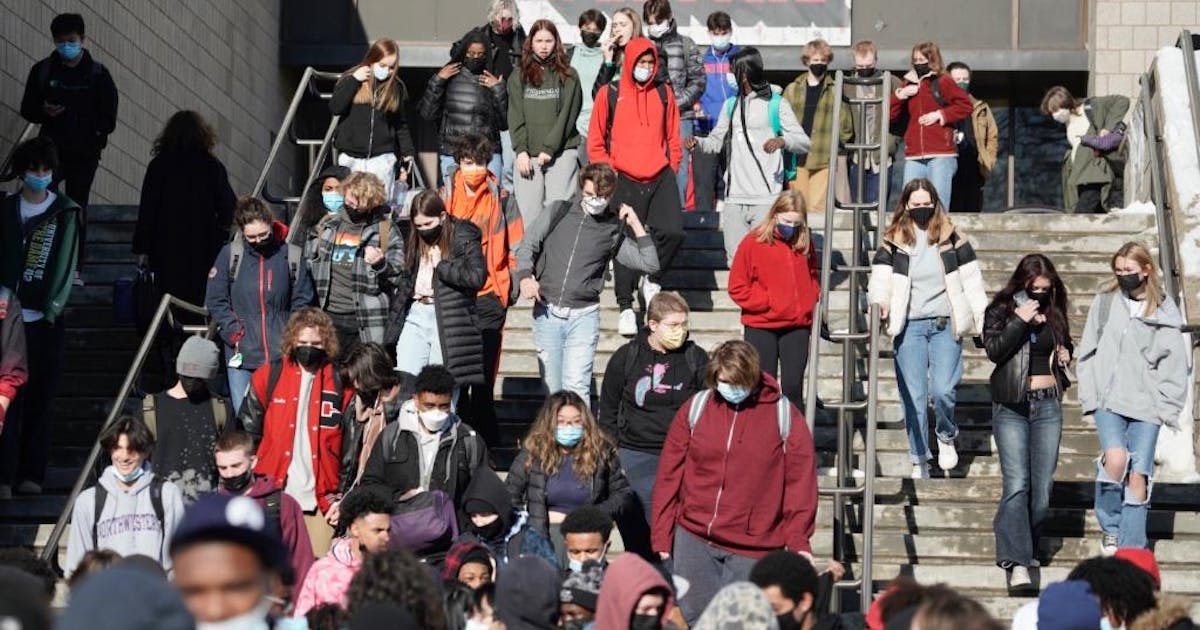 St. Paul students on Tuesday implored the state’s second-largest district to join its neighbors in shifting to remote learning to stop the spread of COVID-19.

Walkouts took place at high schools and middle schools across the city — days after Superintendent Joe Gothard chose to stick with in-person instruction as Minneapolis, Roseville and other districts went virtual.

Teachers also had pushed for improved safety measures in St. Paul. But on Tuesday, it was time for the students to be heard, said Jerome Treadwell, a senior at Highland Park High School and executive director of the group Minnesota Teen Activists.

“This is an equity issue,” he said at a morning news conference. “This is life or death.”

Late Tuesday, the school board considered a motion to shift the entire district to virtual learning for two weeks beginning Friday, but it was defeated, 4 to 3. Such action now would come on a school-by-school basis.

Student leaders want two weeks of distance learning plus action on nine demands that include stronger masking and testing protections, and development of a metric to determine when individual schools should shift to remote learning.

Just before students were set to begin mobilizing for the 1 p.m. walkouts, the district sent e-mails to families outlining its guidance on when schools would go virtual, saying families will be alerted when 25% of teachers are absent on a given day, and that if the rate is projected to last more than three days, schools would shift to remote learning.

At Washington Technology Magnet School on the North End, freshman Dony Timmerman helped direct more than 200 students across Rice Street, with many chanting about having a voice — and not letting it be taken away. Timmerman said he was out last week with COVID, and he heard reports about empty desks and absent teachers.

“On Friday, my sister said she had a substitute in every one of her classes, which is a bit absurd to me,” he said.

Tuesday’s show of student strength is part of an emerging national trend. After many months of adults dominating debates over masking and other measures, students from New York City to Oakland, Calif., have been stepping up to demand safety protections and the return to distance learning as COVID cases have surged.

St. Paul Public Schools, as of Tuesday, had reported 2,444 positive cases during January, up from 690 in December.

Students were aided Tuesday by the organizing efforts of Minnesota Teen Activists, which led a statewide walkout last spring in response to the death of Daunte Wright as well as a protest in St. Paul in June over cuts to arts programs across the district. On Tuesday, posts about each of the afternoon’s walkouts appeared on the group’s Instagram page.

Last week, Gothard initially considered going to online learning beginning Tuesday, but said he backed off when he couldn’t get buy-in from the St. Paul Federation of Educators (SPFE), according to a message he sent Thursday to district staffers.

Leah VanDassor, the union’s president, countered with a districtwide message of her own. She said the plan did not address whether students and staff would have adequate masks and testing materials plus what a day might look like for students who show up to a school that has shifted to distance learning.

State law specifies that if a school district moves to online learning, an in-person option and meals still must be offered.

The district said Tuesday that it had ordered additional rapid tests for staff and students, as well as medical-grade and N95 masks for students. The masks were being made available previously to staff, the district said. It also reaffirmed that all staff in a school that has moved to distance learning must report to work if they are not sick or in quarantine.

Other actions sought by students involved contact tracing and quarantining.

Though not specified as part of the demands, Angela Nguyen, a junior at Harding High School, said the district needs to do a better job of educating families about masking and vaccines, especially those who don’t speak English or live in underserved communities.

Treadwell said that if the demands aren’t met, the walkouts will continue.