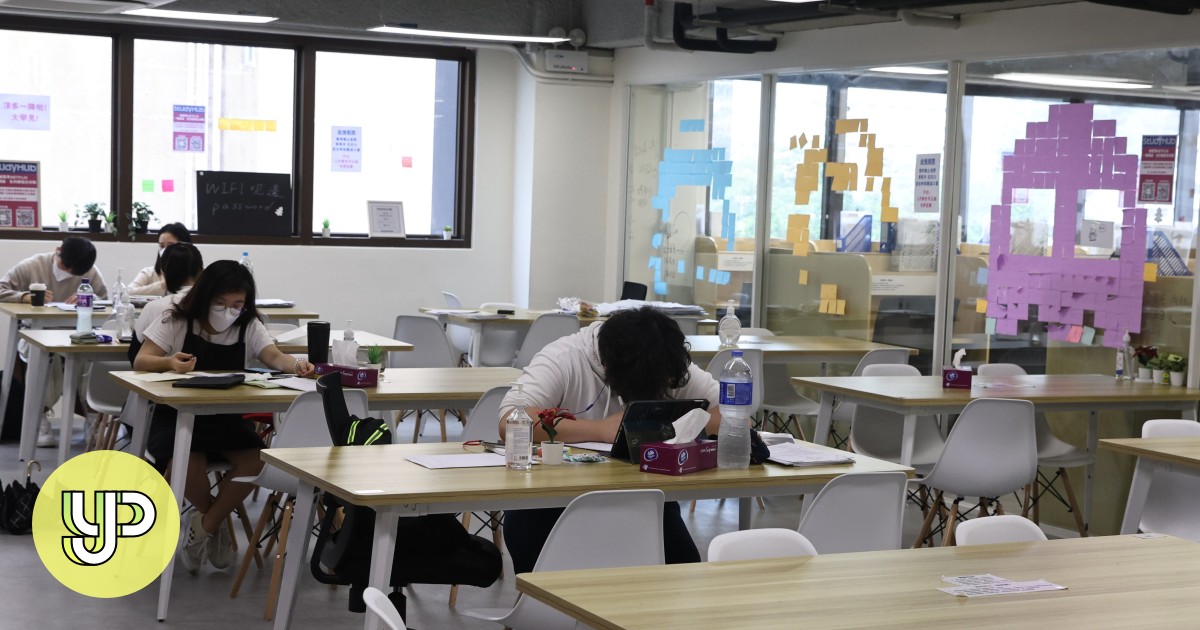 In a city starved of space, Hong Kong’s senior secondary school students can study in a roomy 5,000 sq ft hub in Kwai Chung – free of charge.

With schools closed and the Diploma of Secondary Education (DSE) exams scheduled to start at the end of the month, this study room is needed now more than ever.

Opened last November to give pupils in Forms Four to Six a free place to work, Studyhub’s decor is minimal, and its space is divided by noise-cancelling glass covered with sticky notes in the shape of Pac-Man characters.

“We don’t have enough resources to make it aesthetically pleasing because hiring an interior designer to decorate the space is very expensive,” said one of the study room’s founders, Joseph Yeung.

“The best designers are the students,” the 27-year-old said. “I want this place to belong to them and be where they can have the freedom to express themselves.”

Its Cantonese name is 精神時光屋, meaning “the chamber of spirit and time”, which was inspired by the Hyperbolic Time Chamber in the popular Japanese manga series Dragon Ball. In the manga, it is where characters can train and get stronger in a short time.

“In the comic, one year in the chamber equals a day in real life,” said Yeung, who is a fan of the series. “I hope everyone who comes here shares the same goal – to level up and conquer the coming public exams in this ‘training ground’.”

One of Studyhub’s founders, Joseph Yeung, wants the study room to be a place where students can freely express themselves. Photo: K.Y. Cheng

But Studyhub is not just all work and no play. At one corner is a leisure room equipped with board games, video games and a karaoke machine. However, it is temporarily closed because of the city’s current social-distancing rules.

“We do not want students to study in a very stressful place, so the leisure room is important,” Yeung said. “Unlike typical study rooms, we think having more fun, more discussions … is good for their studies. This also helps builds a happy community.”

The co-founder said about 2,500 students had signed up for the study room since it opened last November, despite two months of closure at the start of Hong Kong’s fifth wave when Kwai Chung saw severe outbreaks.

Now, open from 9am to 10pm every day, it operates at half capacity, with a maximum of two people per table. Students who want to book a seat are required to register online and scan a QR code upon arrival.

Studyhub meets a pressing need for the city’s youth – something that Yeung and five of his friends who are tutors discovered last year when they used Instagram to ask students what they needed most amid the pandemic.

After hundreds of pupils responded requesting a study space, Yeung and his friends decided to self-fund the project, spending about HK$1 million on rent and construction costs.

However, they refuse to charge students, insisting that the study space must be accessible to those in need.

“More students can benefit from our service if it is free,” Yeung said, “so we decided to think about money later.”

The hub is divided into two main areas: a quiet space with 106 cubicles, and a collaborative hub with 10 desks.

“The [collaborative] area helps students socialise, especially when in-person classes are suspended and they have missed making memories with friends,” said Yeung.

Eric*, a student from Cheung Sha Wan Catholic Secondary School, is among Studyhub’s visitors needing a study space to prepare for his public exams.

“The first time I came here, I was stunned by how spacious it was,” he said. “I’ve been to some co-working spaces that cost about HK$100 a day, but they’re smaller.”

The Form Six student lamented how his final year in secondary school wasn’t what he had expected because much of it was spent doing online learning.

“I switched to my current school when I became a senior form student, so I didn’t know many classmates in my year,” Eric said.

Now, the study hub serves as a place where he can study with his classmates, while making friends with other students who are also cramming for the coming exams.

“Before the restrictions, I could go to the leisure room here to sing some songs or play games to relax whenever I felt exhausted from studying,” he said. “This place allows me to work hard and play hard.”

To support its mission, Studyhub is working on sources of income. Last month, it launched a subscription-based tutorial platform to help students prepare for the DSE exams. About 300 pupils have already signed up.

The founders’ next steps include opening a coffee bar for nearby office workers and expanding the study hub’s services to other parts of the city.

“We will open more free study rooms in different areas if we have enough money … but it will remain free for [senior] secondary school students,” Yeung said.
*Full name withheld at interviewee’s request.

Click here to download a printable worksheet with questions and exercises about this story. Answers are on the second page of the document.

Previous post Banking Service Market Comprehensive Study over Players, Its Application And Segmentation 2022 | Taiwan News
Next post HELP online course on Violence against Women and Domestic Violence launched for Law Students of the University of Prishtina