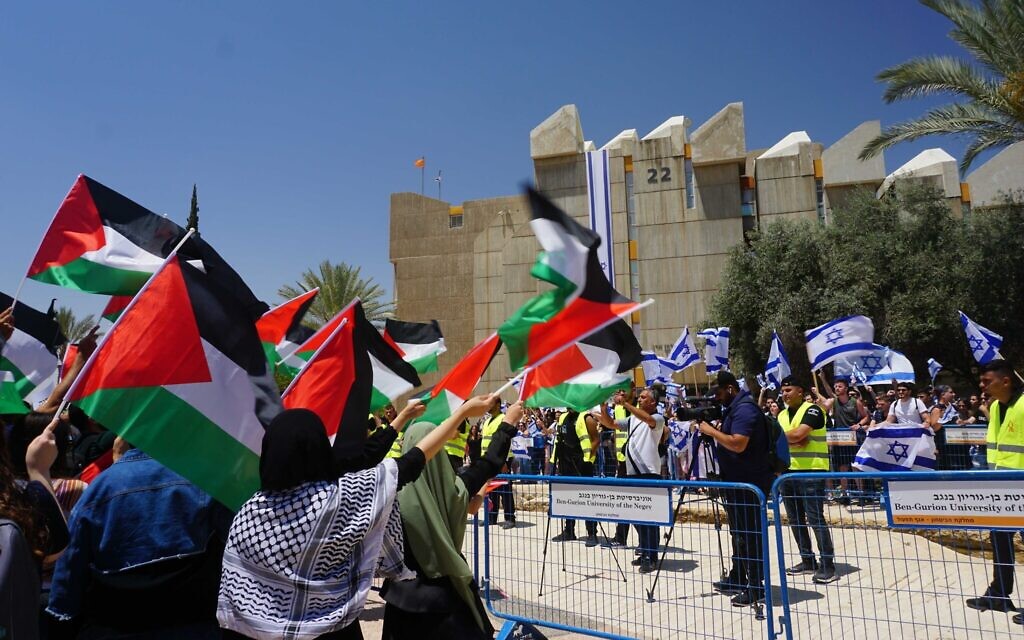 Students at Ben-Gurion University of the Negev in the southern city of Beersheba held a pro-Palestinian rally on the campus Monday, waving Palestinian flags and singing nationalist songs after being prevented from holding a protest on Nakba Day, which laments the establishment of the State of Israel, last week.

Pro-Israel students set up a counter-demonstration opposite the rally and the two sides were kept separate by barriers, police and security personnel.

Non-students who arrived with Israeli flags were not granted entry, a measure the university explained as intended to keep the peace. Students were allowed to bring in Israeli flags.

Ruvik Danilovich, the mayor of Beersheba, slammed the pro-Palestinian event, writing in a letter to university president Daniel Chamovitz that it was “a disgrace.”

“The Palestinian flag is being proudly raised and songs sung praising Israel’s enemies whose only desire is to destroy it,” Danilovich wrote.

Israeli and pro-Palestinian students stage protests at Ben-Gurion University in Beersheba on May 23, 2022. (Emanuel Fabian/Times of Israel)

“My heart goes out to the dear bereaved families, who lost those dearest to them and are watching this disgrace,” he said. “Another red line was crossed today.”

“As the president, you must have a clear statement about the matter,” Danilovich urged.

Education Minister Yifat Shasha-Biton, a member of the right-wing New Hope party, said, “The images we saw this morning are unbelievable.”

She said the Council for Higher Education, which oversees Israel’s universities and colleges, would examine the rally as potential incitement.

Opposition Leader Benjamin Netanyahu’s Likud party said the flags were flown “in the heart of Beersheba” due to Prime Minister Naftali Bennett and Foreign Minister Yair Lapid’s “government of fraud and weakness.”

“Everyone already understands that a government that depends on supporters of terrorism and the deniers of Zionism can not fight terrorism and preserve Zionism,” a statement from the party said. The opposition has repeatedly attacked the coalition for its inclusion of the Islamist Ra’am party, saying the faction’s participation in government threatens Israel’s security.

The event also led to tensions between lawmakers during a hearing of the Knesset’s Education Committee.

New Hope MK Sharen Haskel, the chair of the committee, said that waving the Palestinian flag, which she said only represented the PLO and is a “hostile symbol,” was illegal.

She also said that the event was symbolic of authorities “not taking harsher steps against inciters,” adding that Jewish students are “asking to study through Zoom because they fear for their safety.”

Her statements were quickly slammed by the committee’s Joint List members Sami Abu Shehadeh, Ofer Casif and Aida Touma-Suleiman, who said that the protestors “were respecting the narrative of the Nakba” and that no one will “determine who is Palestinian or not.”

The university responded with a statement noting that International Diversity Day was two days ago, and that the events showed that students from all over Israeli society at the campus are able to “hold a variety of opinions and views.” 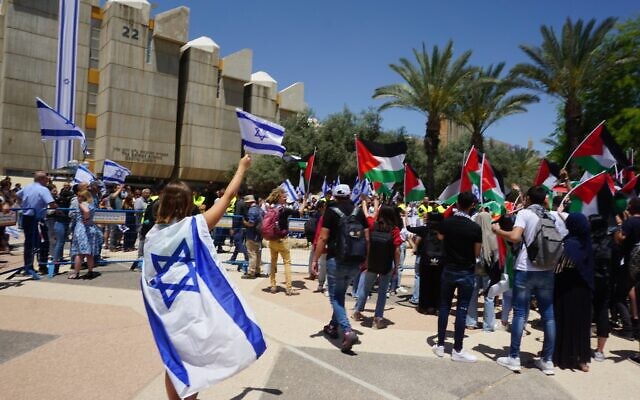 Israeli and pro-Palestinian students stage protests at Ben Gurion University in Beersheba on May 23, 2022. (Emanuel Fabian/Times of Israel)

The campus, it said, is “a meeting point” for people and new ideas, and therefore administrators allowed “two political gatherings with opposing views.”

“We are proud of our students who care about those around them, and express their opinions. Today they confronted opposing views, but maintained public order and conducted the rallies properly,” the university said.

The local chapter of Im Tirtzu, a right-wing nationalist activism group, in a statement criticized the university for keeping non-students out of the college ground.

“The waving of the PLO flag in academic institutes is not supposed to pass quietly. We will continue to campaign for Zionist values in every place and at all times,” Im Tirtzu said. 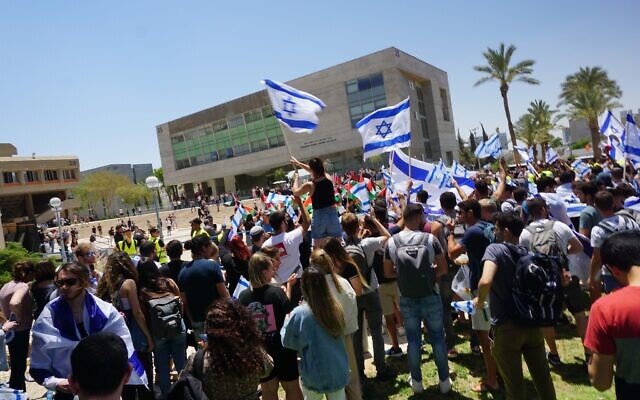 Israeli and pro-Palestinian students stage protests at Ben Gurion University in Beersheba on May 23, 2022. (Emanuel Fabian/Times of Israel)

Two weeks ago, a small group at Ben-Gurion University gathered to protest the death of Al Jazeera journalist Shireen Abu Akleh, who was killed while covering clashes between Israeli soldiers and Palestinian gunmen in Jenin. They quickly dispersed when other students began to form a counter-rally.

The group sought to hold a protest to mark Nakba Day, when Palestinians lament the establishment of the State of Israel, but were asked to delay it until Monday, the organizers told The Times of Israel.

On Monday, the organizers stressed that the event was not a “protest,” but rather an “assembly” for Nakba Day. They said it was the first such gathering on the campus grounds, and they plan to hold a similar rally every year, subject to approval by the university.

“It’s important to note the difference between their protest and our assembly. There is a huge difference, there is nothing to protest about for remembering the Nakba,” Watan Madi, one of the organizers said.

She added that the group only waved Palestinian flags and sang songs, denying there were any hateful chants on their side.

On the Israeli side, many of the demonstrators chanted “Death to terrorists,” and some added, “You are terrorists.”

Last week, Im Tirtzu activists clashed with participants at a much larger Nakba Day rally in Tel Aviv University. Three Arab students were arrested by police after a brawl broke out between them and the Im Tirtzu group with both sides trading blame as to who was responsible.

Palestinians call Israel’s founding in 1948 the Nakba, an Arabic word for catastrophe. Hundreds of thousands of Palestinians fled or were expelled during the War of Independence as the nascent Jewish state fought for its survival.

Rallies are held every year on May 15, the anniversary of Israel’s Declaration of Independence. Israelis celebrate their state’s establishment on the Hebrew date, which shifts from year to year according to the Jewish calendar. 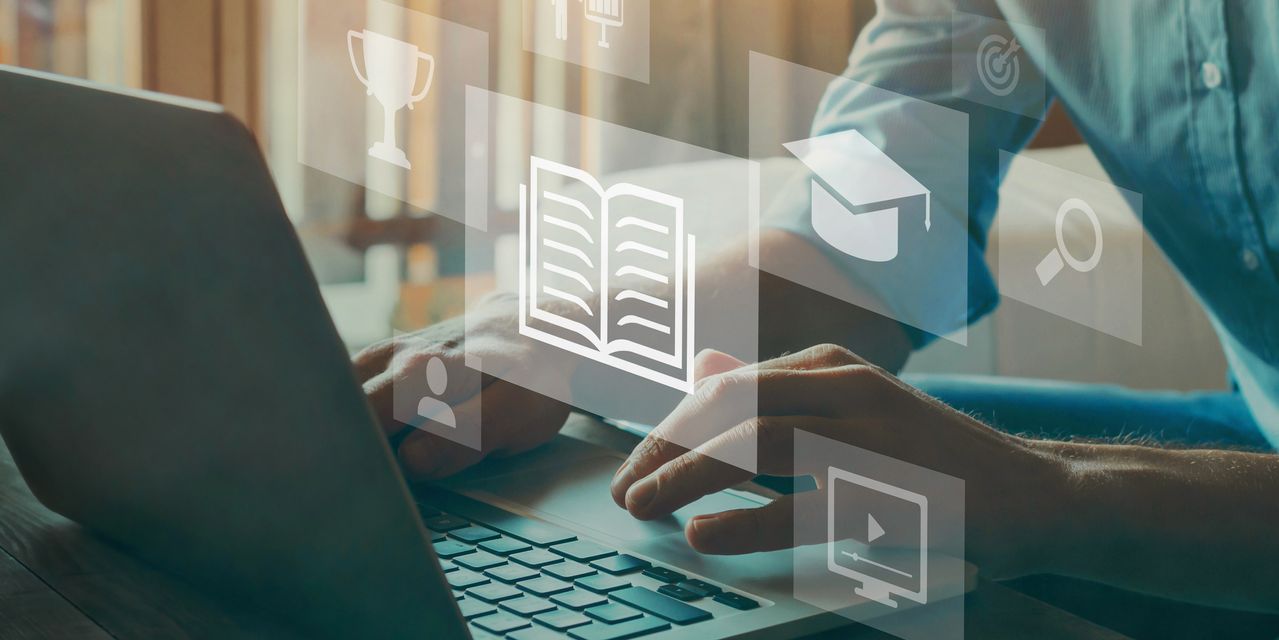 Previous post The Pros and Cons of Online Classes

Next post What drove schools to reopen during the pandemic?