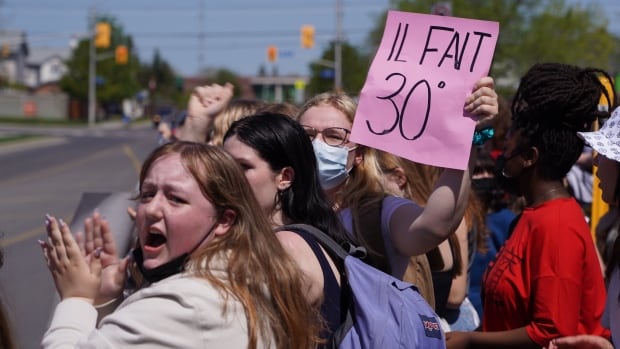 The arrest of a teenager by Ottawa police during a dress code enforcement protest at an Orléans high school on Friday has drawn some criticism online, but both police and the school board say responding officers handled the situation appropriately.

The youth had been asked repeatedly to stay off school property and off the road in front of École secondaire catholique Béatrice-Desloges, police said. He was released without charges or tickets.

Somerset ward Coun. and mayoral candidate Catherine McKenney posted on social media Friday that after the Freedom Convoy protests initially resulted in “no action,” the police response to the youth’s actions was “astounding.”

“A youth wants to cross a street … to join a peaceful protest against sexist practices [and] gets taken away by police. There is so much wrong here and it’s not the kids. They are alright,” McKenney wrote on Twitter on Sunday.

About 350 students took part Friday in the protest off school property, just across the street from École secondaire catholique Béatrice-Desloges on Provence Avenue, near Innes and Trim roads.

They were protesting a dress code enforcement blitz at the school the previous day, when mainly girls were pulled out of class to see whether their clothing conformed to the rules.

While most of the students stayed on the sidewalk across from the school, “some were on the street,” according to Jason Dupuis, a superintendent of education at the French Catholic school board Conseil des écoles catholiques du Centre-Est (CECCE).

School administrators decided to call police “to help slow down the traffic and make sure that the students stayed on the sidewalk,” Dupuis told CBC Radio’s Ottawa Morning on Monday.

Police confirmed that account in a briefing report prepared by chain of command, signed by interim chief Steve Bell, and provided to the Ottawa Police Services Board and media.

School staff called with their first traffic safety concerns at 11:30 a.m. Friday, a member of the public called at 11:40 a.m. to report the same fear, and school staff then called again “asking for more police to attend,” the briefing reads.

Responding officers tried to keep things calm, but some youths who aren’t students at the school — two male teens in particular — “were repeatedly crossing the roadway to the protest and agitating the crowd,” police wrote.

“At one point a large number of students flooded the roadway following one of these youths across the road,” and a school staff member told police the two youths weren’t students at Béatrice-Desloges and weren’t allowed on school property.

Police told the two teens “at least five times” to leave school property, stay off the road, and remain on the opposite sidewalk, the briefing states.

“As you have seen on social media, after these warnings and interactions, one of these youths was arrested at the scene for trespassing and later released with no tickets or charges. A parent of the arrested youth was contacted by police and notified of his arrest and unconditional release,” the briefing reads.

During the protest, young people from outside the school community showed up and “were being dangerous,” Dupuis said. They carried vulgar signs, didn’t co-operate with police and provoked police, he said.

A dress code blitz at a French Catholic school in Orleans is reigniting a debate about dress codes in schools. We ask the superintendent of education at the French Cathlic school board.

“The way [the police] intervened is up to them. I think they did great work. Our students were very respectful of how to protest, and students that were from outside of our school unfortunately did not co-operate and I saw some behaviour that was, for me, not acceptable, and the police did what they had to do,” he said.

“Unfortunately, the videos of what was done before that led to that were not shown, but that’s not for me to comment.”

Interim chief Bell wrote that while he understands the community’s concern, “calls from the school and a member of the public prompted a legitimate police response.”

The protest ended and the crowd dispersed at about 12:50 p.m.